Wisdome held 15 sessions of a weekly solo lecture series where each speaker answers the questions of “what sharing is” and “why we need to sharing.” The event held from January to April 2013 under the title of“Seoul meets sharing economy” drew attention and interest on sharing economy from the media and citizens. 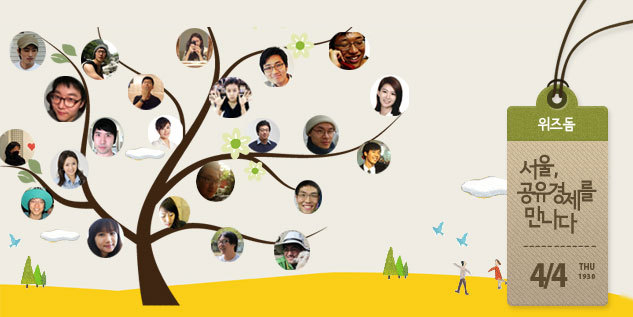 Under the following condition: In the field of expertise of each area

Wisdome built the foundation for Seoul to push ahead with its Sharing City policies. The company explained what sharing economy is to people who are not familiar with the new concept, introduced sharing economy services, and described why sharing economy is needed in our life. It also held a lecture series for 3 months from January 2013. Under the title of “Seoul meets Sharing Economy,” the event was held every Thursday with Seok-won Yang, then organiser of a co-working space “Co-op,” as the first speaker who was followed by representatives from My Real Trip, Zipbob, Kiple, People’s Library: Bookshelf, Open Closet, BnBHero, PlayPlanet, Socar, Kozaza, Wonderlend, Wishket, Wisdome, and Fair Space. All speakers shared their own ideas about sharing and sharing economy and talked about how their business philosophies were reflected in their services. 100 to 300 attendees participated in each session.

In the “Seoul meets Sharing Economy” series, each sharing economy entrepreneur introduced sharing economy and related services on their own way to participants, like you rent a different book from a library; Attending the 15 lectures were like reading 15 books about sharing economy. The finale of the series was a party titled “Sharing City Seoul Night” where sharing economy businesses and interested people met each other casually and built networks.

Wisdome demonstrated its expertise by organizing the event; its business concept of “human library” was well incorporated into the the program of the event. “Human library” means everyone has one’s own story to tell and any story is useful to someone else. People who are ready to tell their story register on the Wisdome website while users select a person from the list who has a story that is interesting to them and then sign up for a session. Wisdom incorporated key features of its service and how people use its website into the planning of the “Seoul meets sharing economy” program. Although it looked like a mere business partnership where SMG awarded a contract to Wisdome, through this program Seoul was able to introduce the philosophy and concept of its Sharing City project while Wisdome was able to enjoy an opportunity to promote its Human Library service to more people.

Published a research paper as a reference material on Sharing City

Wisdome organized 15 sessions of “Seoul meets Sharing City” program for three months and at the same time produced a research paper in collaboration with Crowd Research Institute. The report was written during the program period and was released a day after the last Sharing City Seoul Night. The report categorises sharing economy services and describes how each model works. Moreoever, it explains why we need to pay attention to sharing economy services and where they have limitations so that would-be sharing economy startups and organisations that are interested in adopting such services.
The report was published online for free under a Creative Commons License, meaning people can use it freely for non-commercial purposes without asking permission, as long as they credit the original author and cite the source and license their new creations under identical terms.

Wisdome was founded in 2012 with a motto of becoming a “platform to share experience.” Initially it launched the human library project, with an idea that shared wisdom can change people’s life, and then divided its business into online platform project and conference project.

In 2012, Seoul declared the Sharing City initiative. And in the following year, Wisdome played the role of promoting the Sharing City initiative and raising awareness about it; it was in line with Wisdome’s founding philosophy. That initial experience became the foundation for the company later on in its efforts to draw attention on the value of Sharing City and organize related events in other cities such as Busan, Daejeon, Ulsan, and Jeonju.